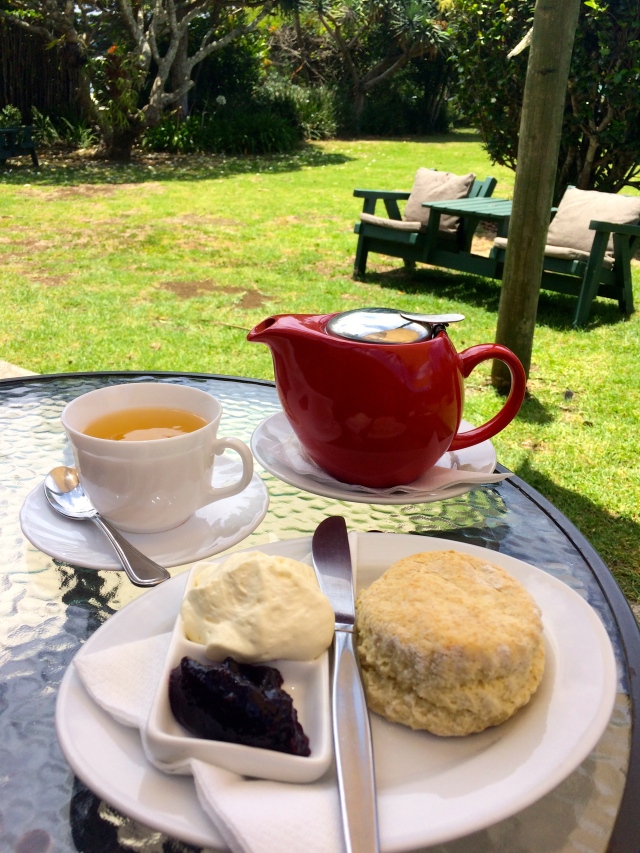 It must be the extensive lawns and subtropical flora that makes me feel like I am in a British colonial outpost somewhere in the tropics. Not that I have been to one before, but Rumours Bar & Cafe could be that place. No surprises there as Norfolk Island was settled by the British just a few months after the First Fleet arrived in Sydney Cove. It’s also in the middle of nowhere: 1,000km due east of Byron Bay and somewhere in between New Zealand and New Caledonia. Since it’s summer, the action at Rumours is outside under the shady verandah overlooking the garden. The interior design in the old house might be described as ‘no-nonsense’, which is probably due to the attraction of being outdoors in the balmy weather admiring the well-manicured lawns and garden. Order as many as the fresh scones as you like, as there is no set Devonshire Tea. I order one scone, which is fresh but robust i.e., not light and fluffy. Choose from boysenberry, raspberry or plum jam. The boysenberry is better than average, but still tastes like a commercial grade jam. The cream tastes as though it’s been squirted from a can and is light and doesn’t add substance to the overall taste of the scone.

Tea: A huge variety but predominantly of tea in tea bags, and a few loose-leaf varieties served in a teapot.

Overall: Enjoy the fresh air sitting out in the garden.